How to Rally a Community Around Your Dig In Project The Weatherford Mountain Bike Club (WMBC) hosted a soft opening for “The Pit” Kid’s Mountain Bike Skills Area and Trail in downtown Aledo, Texas on Saturday, March 5, 2022. The purpose of the opening was to get the wheels (both kids and adults, novices to experts) on the dirt, pack down the trail and receive positive and critical feedback on what we’ve built to date.

The Pit is a dormant tennis/basketball court located at the Downtown Aledo Community Center. The Pit surface resides approximately 30 feet below the nearby community center within the confines of steep slopes on two sides. The city researched resurfacing the court surface, but to do so was cost-prohibitive and exceeded the parks department's annual budget. 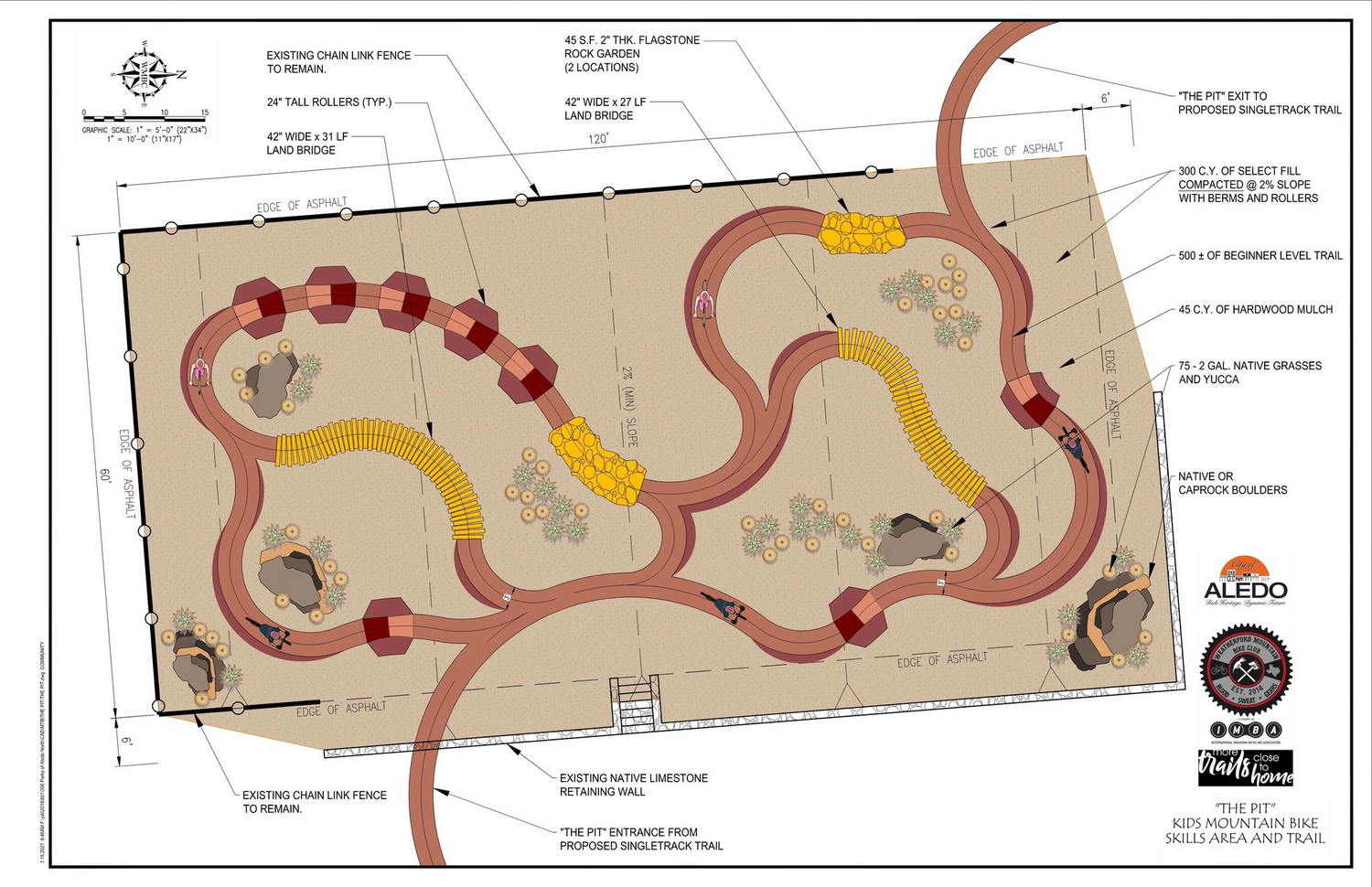 The park director asked the WMBC if they had any interest in the property for a trail and, perhaps, the dormant court. After the WMBC toured the property and consulted with our trail building contractor, Shadow Johns of Shadow Trail Designs, the club developed a concept plan and budget to present to the city council. The concept plans featured scaled-down, beginner-friendly trail elements to be constructed on the court and a singletrack trail system requiring that the trail user enter and exit The Pit to ride it. The concept plans and proposed costs were presented to the city council in the summer of 2021 and the project was given the green light.

WMBC has successfully funded its trail projects by utilizing Dig In, a matching grant organized by IMBA and financed by Shimano. WMBC applied for a Dig In grant, using concept plans to garner approval from the City of Aledo and set a goal of $6,000. The club submitted its application, met the $6,000 goal, unlocked a $2,000 matching grant from Shimano, and was awarded the grant funding late last summer.

WMBC began promoting The Pit project to local businesses and the local mountain bike community using the concept plans to explain our goals. Almost immediately, First Aledo Bank contacted WMBC about hosting a fundraiser for the project. The club also began receiving phone calls from citizens wanting to contribute funding to The Pit. The bank fundraiser was a great success! Best of all, the bank matched all of the dollars raised the night of the fundraiser. Through the summer and into fall, WMBC raised over $24,000 for the project! We credit having very clear and understandable exhibits explaining the project for the club's success in creating a lot of excitement for the project.

In November 2021, WMBC began to demolish the old chain link fence, metal pipes and old electric infrastructure from the court and pile on 300 cubic yards of dirt, over 20 tons of boulders and hundreds of square feet of rocks to convert the court into a small mountain bike skills area. All thanks for this project phase go to Patrick Edmonson of CME Construction Services. Patrick donated his time, skid steer and considerable talent to do the work. Once all the dirt was on-site, WMBC began to work with Shadow Trail Designs to build the small rollers, berms, rock gardens and bridges suitable for kids and beginners. Additionally, WMBC collaborated with Shadow to construct a 1,800 linear foot singletrack trail that meanders around the community center property and nearby creek. Additionally, Clear Fork Materials provided all of the dirt, boulders, rock and decomposed granite at a considerable discount. WMBC also hosted a volunteer day with the Fort Worth REI employees to plant native grass seed. In October 2022, WMBC will add native trees, more grasses and yucca to The Pit.

One of the most fantastic aspects of The Pit is the talents of a local Aledo artist named Julie Hiltbrunner of Tiny Chick Pottery. WMBC commissioned Julie to create kid-oriented trail etiquette signs for The Pit. WMBC supplied Julie with the message for each of the signs and these signs are part of the trailhead kiosk and the trail. We think she did a fantastic job of getting the critical message of proper trail etiquette to kids. 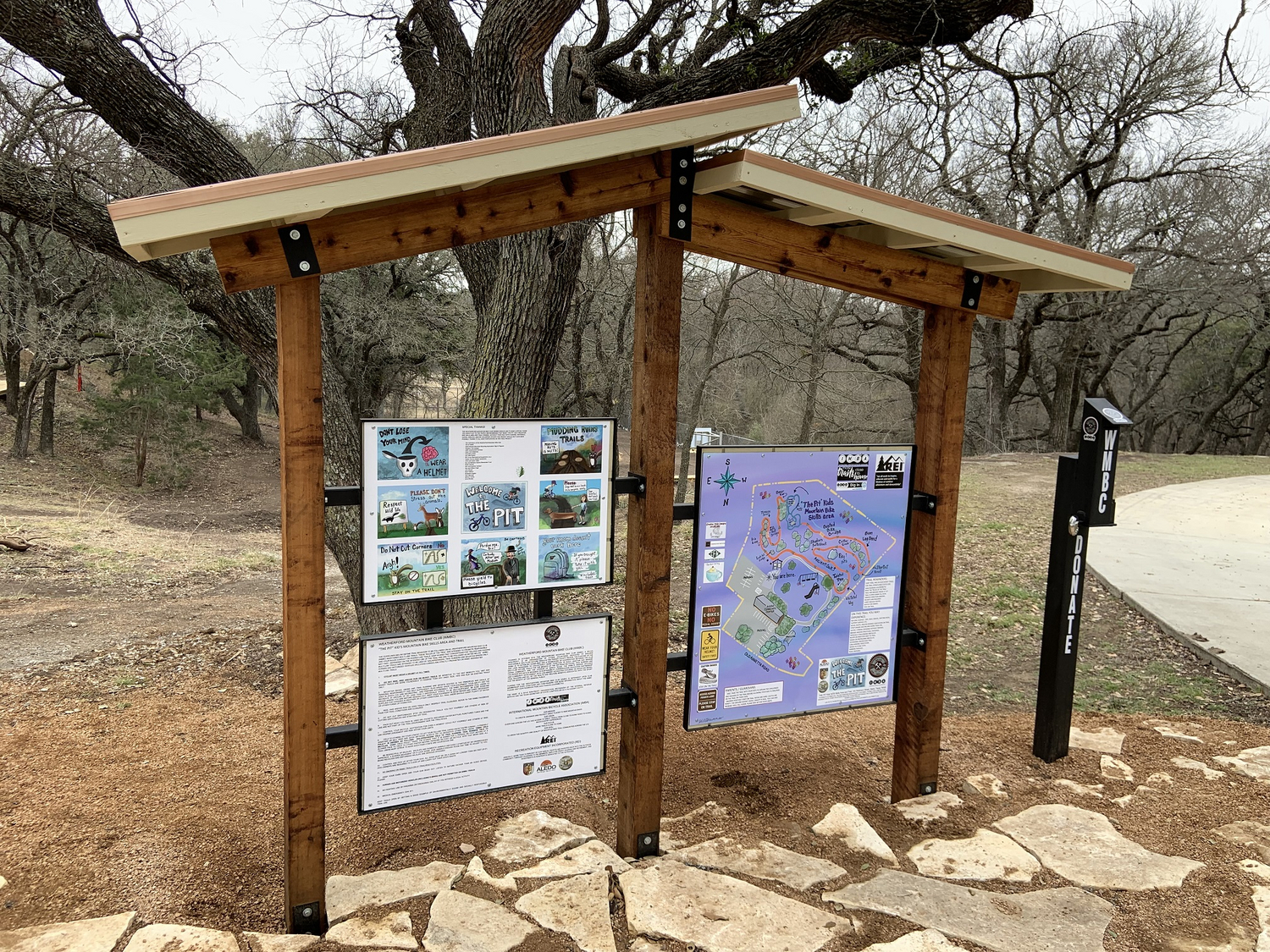 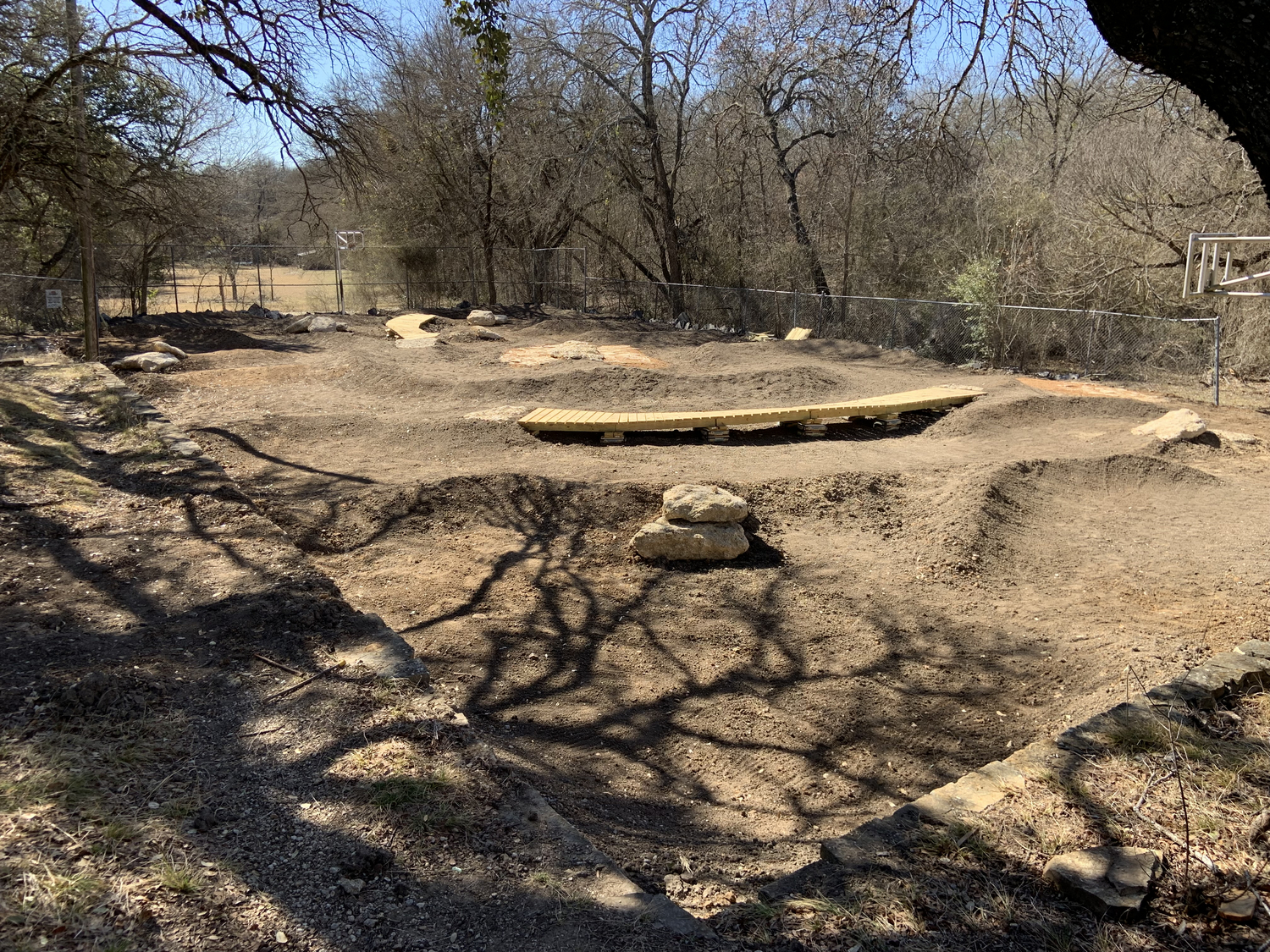 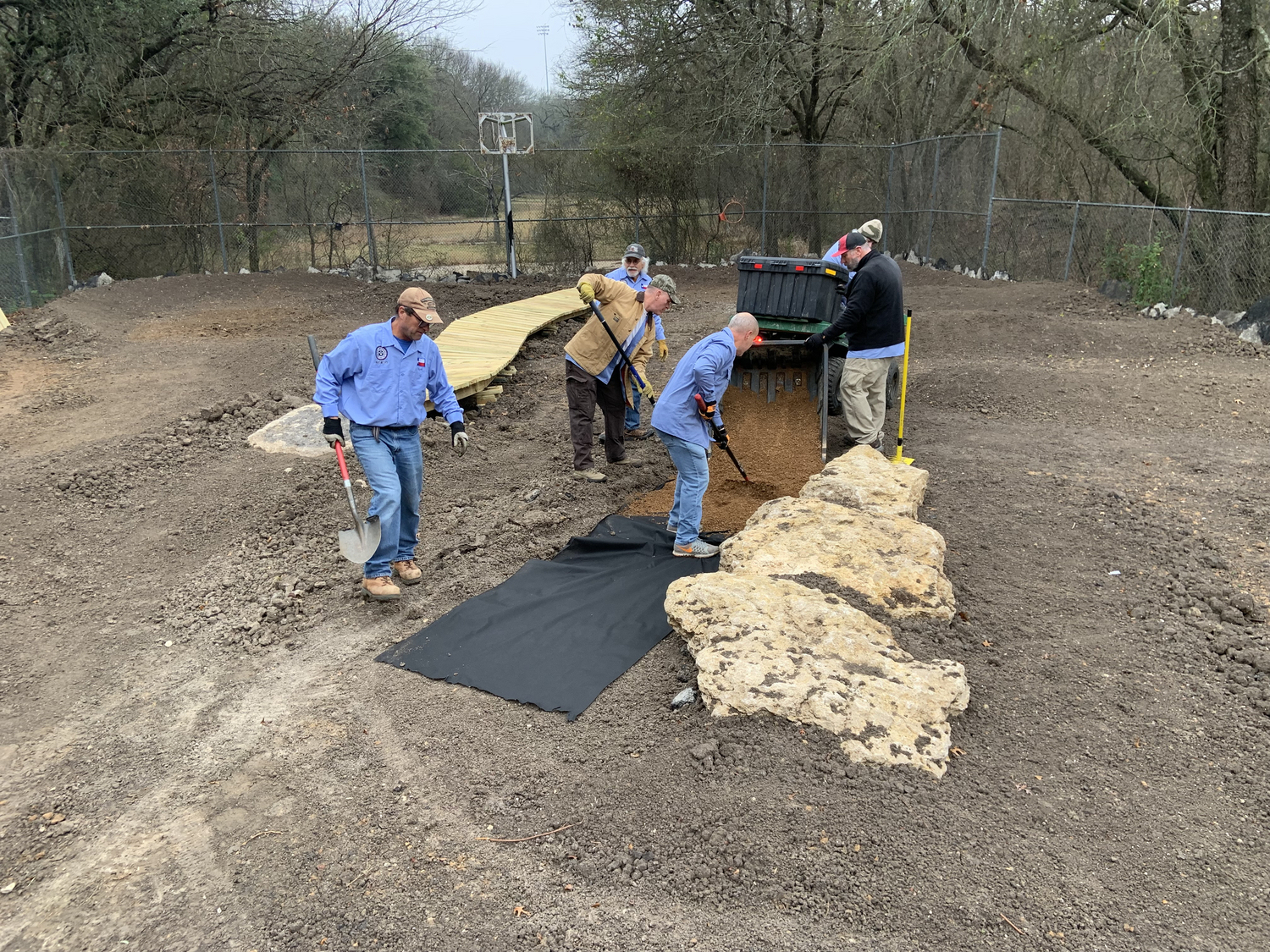 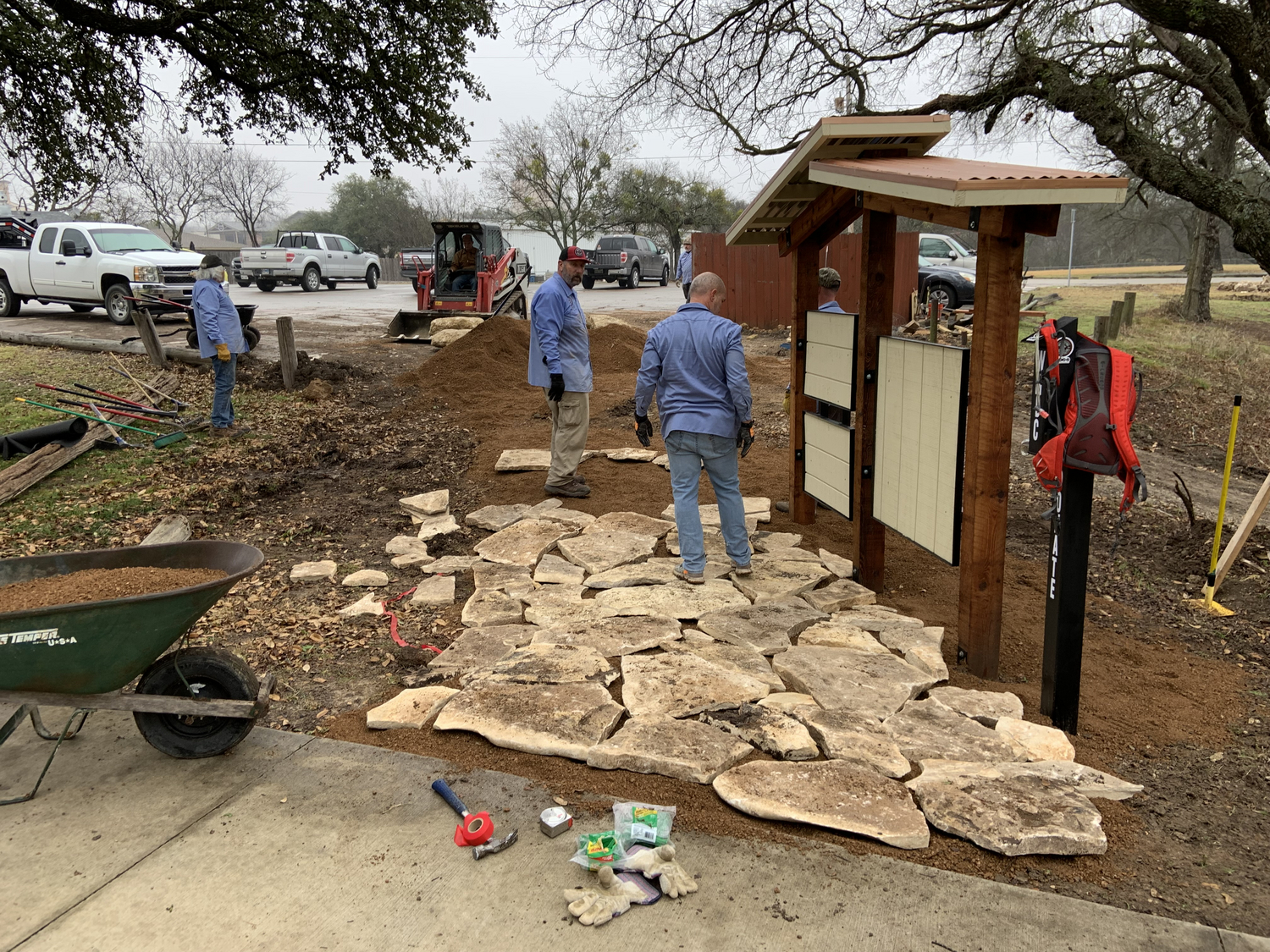 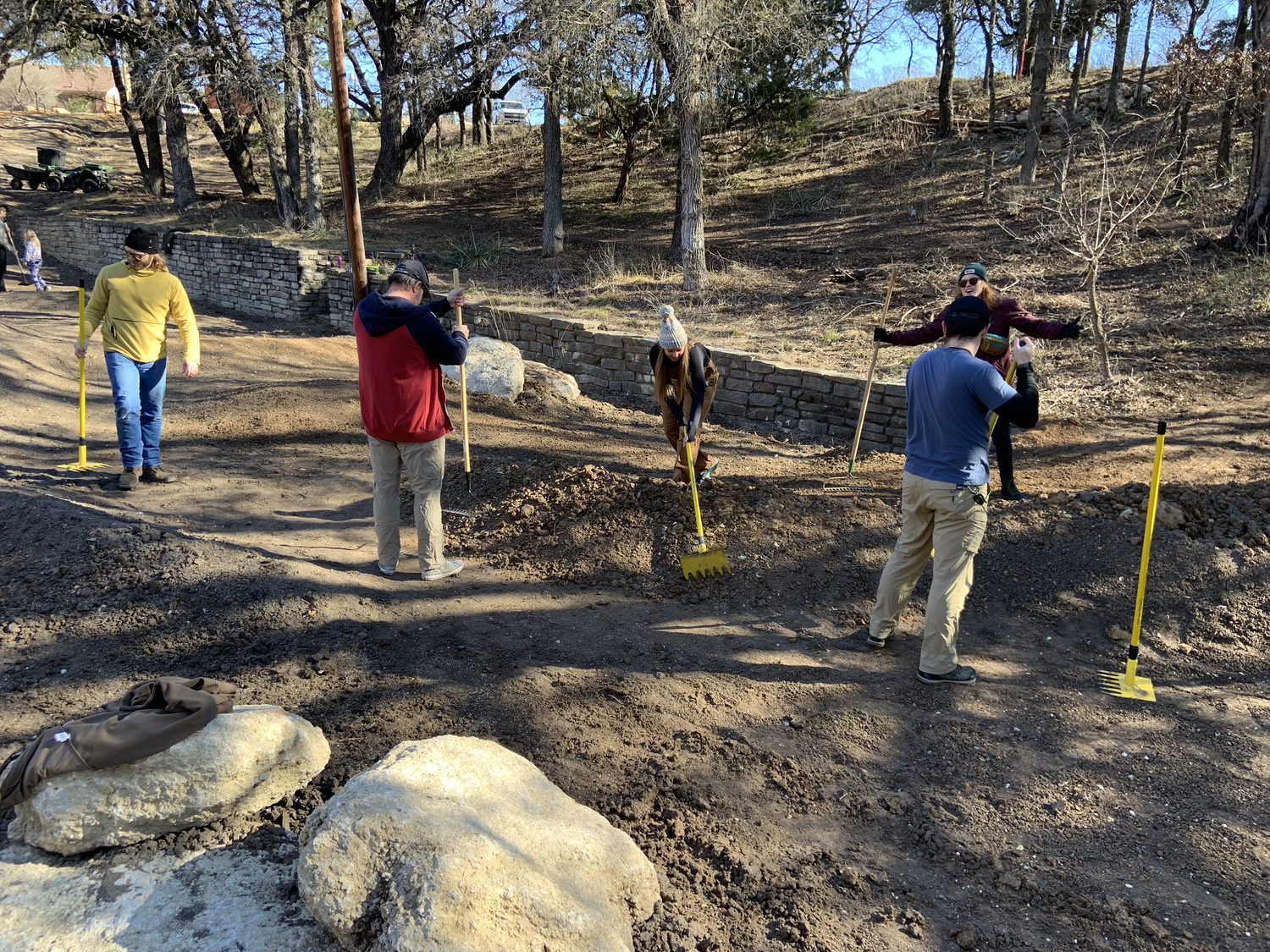 The Pit was entirely built with volunteer effort and fantastic cooperation with area businesses and citizens that provided tremendous discounts on services, materials, and funding. We’ve noted those folks who contributed to this project on the trailhead kiosk sponsor panel. We absolutely could not have done this project without their help. The Aledo Community Center has plenty of parking, a fantastic playground, a pavilion, nearby restaurants, coffee shops and stores. The WMBC is looking forward to everyone checking out what we’ve built and stay tuned to our social media for future updates and improvements to The Pit. 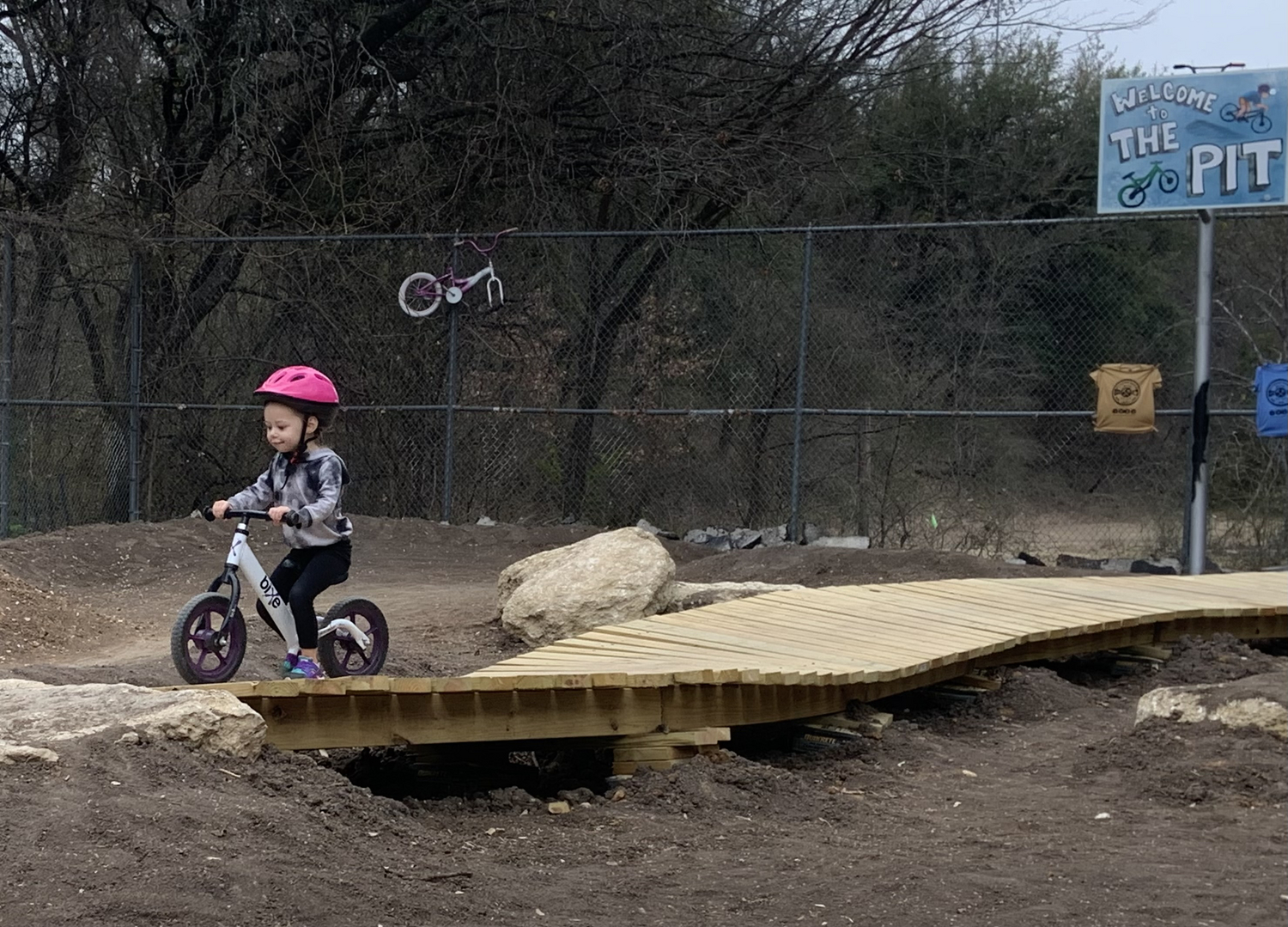 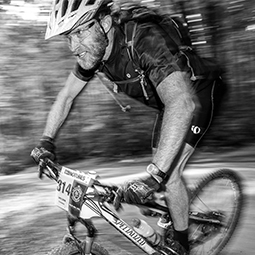 Lawrence "LC" Colvin is the president of the Weatherford Mountain Bike Club, an organization of citizen volunteers dedicated to building sustainable, multi-use nature trails in City of Weatherford and the Parker County region of Texas.