This spring, the Ithaca Beer Company partnered with Cycle-CNY (IMBA’s chapter in the southern tier of New York state) to sponsor the “Green Trail Initiative.” This co-promotion, named after Ithaca Beer’s easy-drinking Green Trail IPA, was geared toward raising funds and support for Cycle-CNY, as well as getting more people involved with mountain biking. 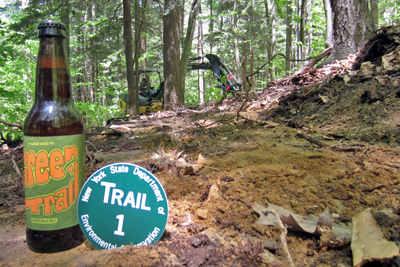 Ithaca Beer worked with a local bike shop, Cayuga Ski & Cyclery, to get their hands on 10 Giant Stance 27.5 mountain bikes. Those 10 bikes were displayed in stores across upstate New York as a “text-to-win” promotion. Additionally, Ithaca Beer hosted several pub nights in May and June, working with local pubs to earn a donation based on Green Trail IPA sales from those specific nights. On top of that, Ithaca Beer Company has pledged a significant financial donation to Cycle-CNY based on total Green Trail IPA sales for the months of May and June. In July, 10 lucky winners rode away with awesome new Giant mountain bikes in July.

Meanwhile, Cycle-CNY trail work volunteers (fueled by Green Trail IPA and CLIF Bars), had been hard at work creating a new trail in a local favorite riding location, Shindagin Hollow State Forest. This new trail was initiated in 2014 with a visit from the Subaru-IMBA Trail Care Crew, and after hundreds of hours of manual and machine work, they officially opened the new Green Trail in Shindagin Hollow this August.

Communities that embrace the many virtues of mountain biking invariably benefit from related sponsorship. This kind of partnership and support displayed by Ithaca Beer Company is simply amazing and benefits all local outdoor recreation enthusiasts, Cycle CNY, local businesses, and the Ithaca Beer Company. Support like this helps to make the group’s journey fun for its hard working volunteers and the local IMBA members.

A big thanks to Dan Mitchell and Gregg Stacy at Ithaca Beer for making this cool promotion happen.

SAMBA and IMBA have been advocating for several years with their partners at Quality Bicycle Products (QBP) to bring a new singletrack trail network to the Harrisburg area. This project has been an ongoing effort between SAMBA and the city of Harrisburg, Dauphin County, Capital Area Greenbelt Association, Swatara Township, Susquehanna Township, Paxtang Borough, Penn Dot, Paxtang Cemetery and others.

The proposed trail system will be made up of two main areas: Cameron Parkway and Paxtang Parkway, and a beginner area at Dock’s Woods that will help to maximize unused green spaces in South Harrisburg. These areas are connected and accessible traffic-free via the Capital Area Greenbelt nature trail from anywhere in the city. The proposed network would offer more than 8 miles of marked, natural-surface urban singletrack trails within city limits.

Read the full article in the Warren Times Observer