As we cross the state line and the sun is setting over the beautiful New Mexico landscape, it resembles a postcard.

Enduro races are becoming more and more prevalent, occurring all over the United States, and IMBA is participating in six for the 2017 season. Our second stop on the tour is The Big Mountain Enduro at Santa Fe, New Mexico.

It is completely black outside when we pull into the Glorieta Campground. We are exhausted and go straight to bed. The sun greets us the next morning and we eager to see what amazing terrain we missed while driving under the cover of night. Most of Friday is spent pre-riding the course. We are told if we pre-ride anything it should be stages three and four. So, here we go! 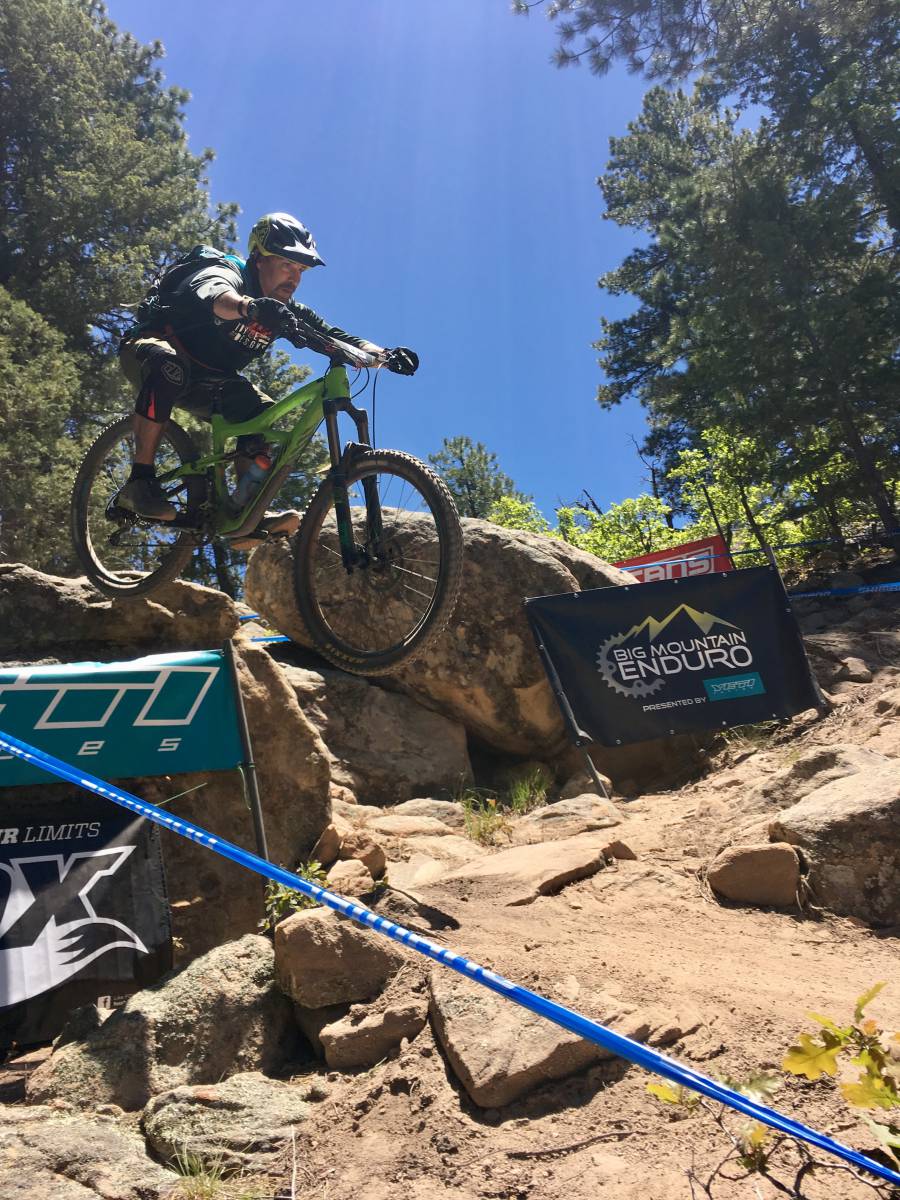 Both stages contain steep rock gardens, multiple rock drops and are considered to be “high risk trails. Riders are responsible for shuttling themselves for the pre-ride, but only with 4x4 vehicles are allow. Looks like we’re hoofing it…

It’s late morning when we start out pedal to the top. We get a real taste of what’s coming tomorrow, and it’s treacherous. The transition to Stage 3 starts out with a 900-foot climb that takes most riders 30 minutes. The transition to Stage 4 is equally as long, but takes us longer. Once we reach the top, the singletrack winds and dips through the forest, shooting us back down towards Glorieta. As much as I want to soak up the gorgeous surroundings, I have to focus on what is in front of me. It takes full concentration to not eat dirt for lunch.

Time to eat, sleep and recover. The riders have 4 stages and over 5,000 feet of climbing tomorrow.

On race day, the early morning air is frigid and racers fumble through their race day rituals to prepare for the day. The general mentality of enduro is; group ride to the top, balls to the wall on the downhill. The riders gather and prepare for Stage 1. The race starts with a six mile, uphill, transition totaling 2,500 feet of gain. The reward, a 2.8-mile loose and slick downhill that runs on top of the ridgeline. We learned that high desert dirt is similar to baking flour…

At this point, some racers are still acclimating to the higher elevation while others are experiencing a Big Mountain Enduro for the first time. By the end of the day, everyone looks spent. Ride totals are roughly 21.6 miles with about 5,200 of elevation gain.

“It was an awesome mountain biking experience.” Herman Owens, Racer

The award ceremony is full of cheer, high fives and plenty of champagne, mostly in the faces of the podium riders. It is apparent from all the chatter that most of us came here to see what we could do and how far we could push the limits.

The post-race trail day is on Sunday morning this time around. Alex Scott from Jagged Axe Trail Construction provided a pile of McLeods for the volunteers who were willing enough to stick around, despite their wounds and exhaustion. We head over to the bottom portion of Stage 4 to see what we could fix from the previous day. 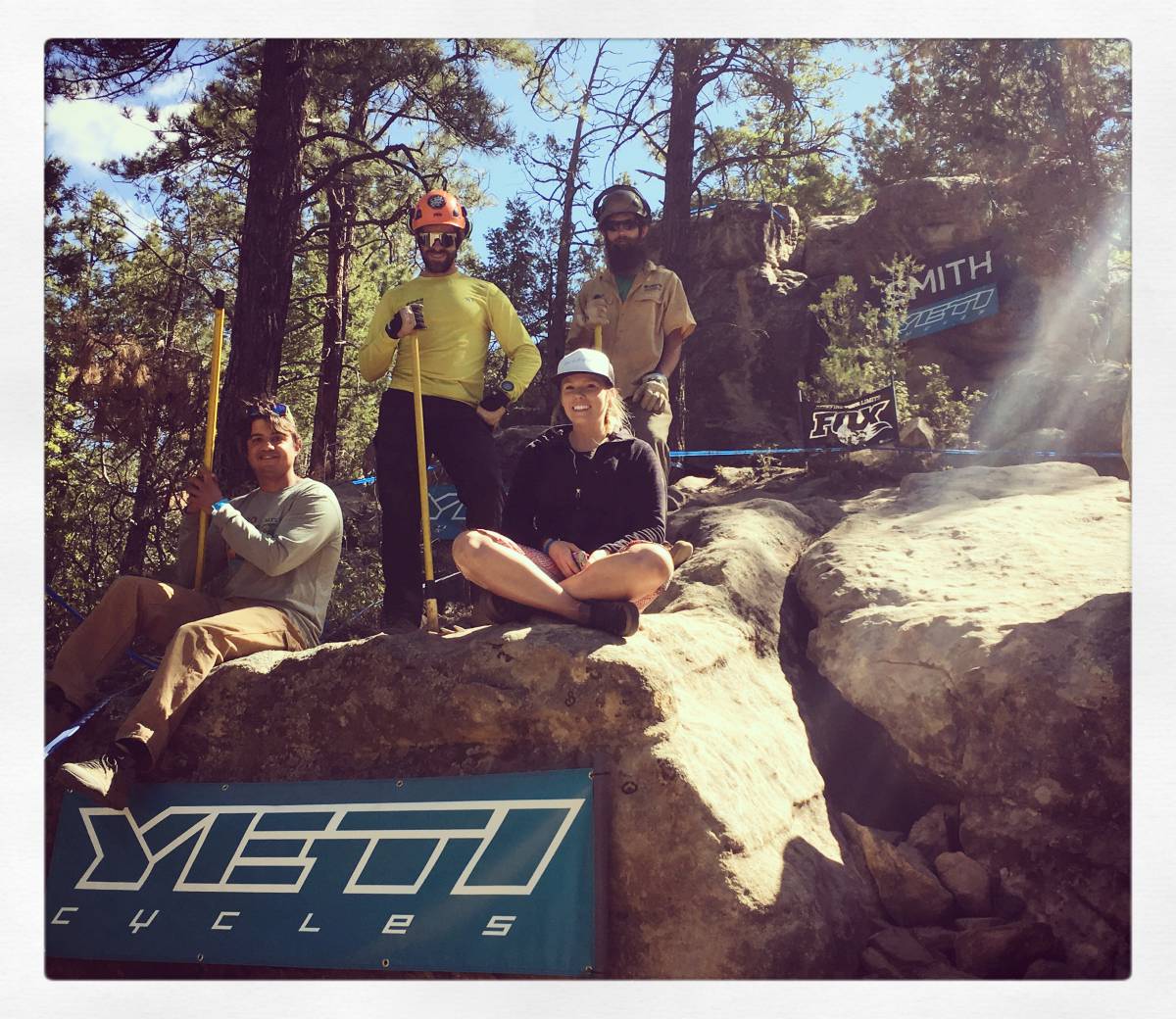 Stage 4 was pretty blown out from the race. There was a lot of dirt displaced by sliding tires, and bodies…

The race was routed straight down a portion of the trail, creating a fall line. For our trail work, we reform the bench, add guide stones and naturalize the surface to keep future riders on the intended trail. We also decided to rock armor and inslope another portion of trail that was eroding. The rock surface will keep the dirt from being further displaced and help with future water and user based erosion. Further up the trail, we remove the “sluff” mounds that were built up on the outside of the turns and also removed loose rocks brought into the trail. Last but not least, we added fill-dirt and re-graded the low spots.

IMBA’s goal is to protect, create and MAINTAIN great Mountain Biking experiences. During the National Enduro Series, we are encouraging racers and spectators to volunteer for trail work! Be a part of something that benefits the entire mountain biking community. It’s remarkable what hundreds of mountain bikes (and spectators) can do to a trail in one day. So let’s keep supporting. And let’s keep riding.